Met a fellow traveler, Ardi, from Indonesia who took the same Trans-Siberian Train with me. We went to take the Metro to our hostel. Navigating the Moscow's Metro was an adventure in itself. Everything is in Russian. The signs, the Metro System Diagram, the Name of the stations, the Map, everything. Oh, the people speak only Russian too! Very few people in Moscow speaks English.
So we had a hard time finding out where to go, which platform to go and which side to g. The thing is that the colour of the Station Names, Signs & Arrows doesn't correspond to the Metro Map. I had to know the Name of the Station in English and memorise the Cyrillic Alphabet and then match it to the map and signage in the Underground Metro. To make things worse, there were tons of people going in and out of the Metro at any one time. And I heard that there are many pickpockets in the Metro and had to be really careful. It was scary.
Oh, the architecture in the Metro Stations is beautiful. It is different for every station and some stations are really grand. It is a sight to see! 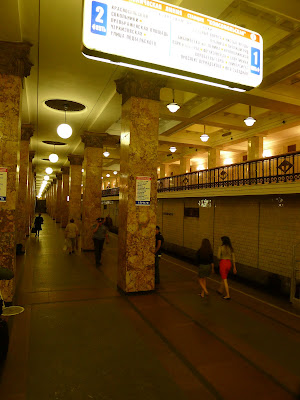 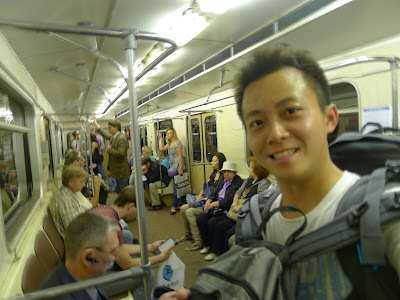 Somehow managed to find my way to the Metro Station I was supposed to alight and I had to do 2 Metro trains transfer! Walking from one line to the other was stressful. Because of the large number of  people walking around me and I had be wary of pickpockets. Carrying my HUGE Haversack too.
Got out of Kitay Gorod Station and got lost while finding my hostel. It was supposed to be a 15 mins walk but turned out to be 45mins. I asked for directions, and even showed people the Address in Russian but they still did not know the place or they didn't know what I was taking about. It was just frustrating. Thank God that I met this gentlemen after 30mins, and he can speak English!!!
First person I met in Moscow who understands English. He was so nice to me and led me all the way to the front door of my Hostel! Couldn't be more thankful! Otherwise, I might walk for more than an hour and still not find the Hostel.
Dropped my Haversack and went out immediately. Didn't even take a shower! Just so you know that I didn't shower for 6 days during the Trans-Siberian Train Ride even though there was a attached Shower Room in my cabin. It was too cold and there was no water heater. So I went out with the same clothes that I wore for the past 6 days without bathing! I just wanted to make use of all the time to see the place. In smell--ly clothes & body though.
Changed currency to Rubles (Russian Currency) and off I went to the Red Square. Didn't get to see the Red Square in all its glory because there were spectator stand erected and occupied half of the Red Square. It was long and wide nonetheless. A big Square. Oh, the Square isn't Red by the way.
The Kremlin Walls are Red though, and it is really high. It goes up to 19 meters at some parts.
(Kremlin Walls) 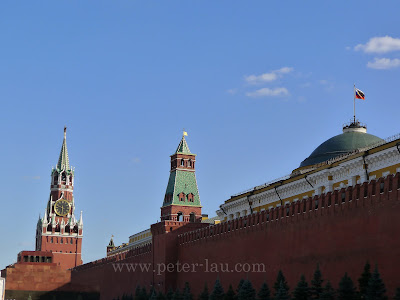 Saw one of the most famous landmarks in Moscow - St Basil's Cathedral, which is big and colourful. 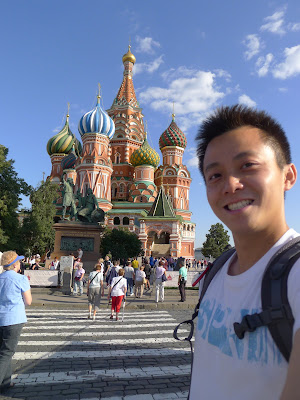 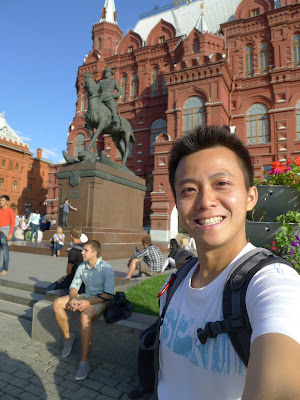 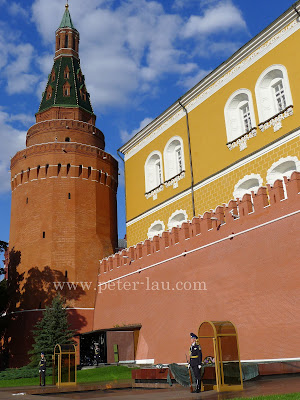 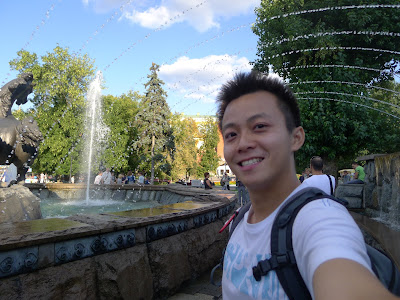 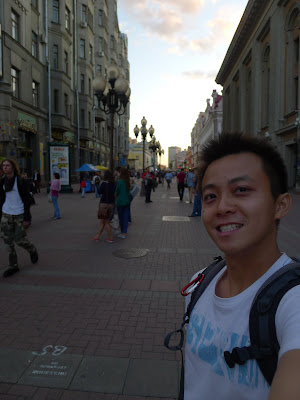 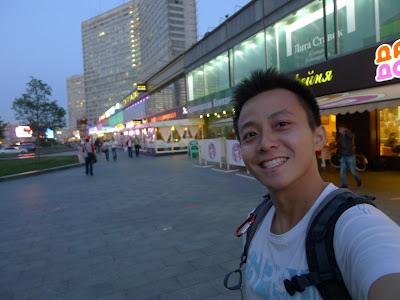 Ardi and I wanted to try some Russian Cuisine and went to look for a recommended restaurant. We walked for quite a while only to see that place under construction. Maybe the building was being torn down or undergoing some renovation. The time was already 10:15pm (Moscow time) and we were starving. While looking around for some Russian Cafe or Restaurant, we stumbled upon one of the World's Most Expensive Street - Tretyakov Drive. All the big brands are there. And then some.
Showrooms for Super Cars are located in that vicinity so I got myself a Lamborghini, 2 Ferraris, 3 Maseratis, and a few Bentleys since I was already there. 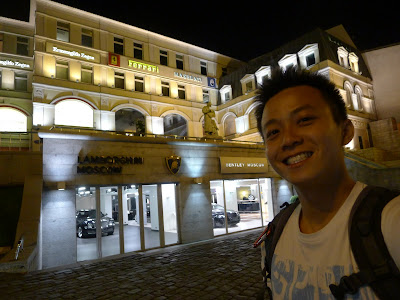 Finally found a random Russian Restaurant Bar and had my First Russian Cuisine. Tasted a bit unusual from what I was used to. Nice nonetheless.
(My Frist Russian Dinner) 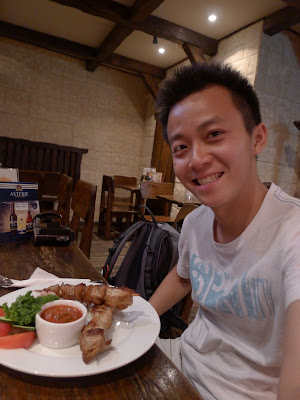 By the time we finished with our food, it was already 11:40pm. Before the trip, I've heard lots of horror stories about Moscow so I was really cautious on my way back to the hostel. It was dark and I was walking so fast that I can feel the muscle burn in my legs. Ran for a while too. Took me about 15mins?
For your own sake, please do not walk back alone at such a late hour in a foreign country, whether it is the former Soviet Union or not. I seriously don't recommend it.
I was staying in a 4-bed mixed dorm and the 3 ladies who were staying there were already sound asleep. I did my best to be quiet but the moment the door opened, 2 of them woke up. Quickly went to the toilet and bathed for the first time in almost 7 days! Never felt so happy bathing before!
Go to Moscow and YOUR LIFE WILL NEVER, EEEEEEEEEEEEEEEEEEEE.......................EEEEE....................................EEVER, BE THE SAME, AGAIN!!!
Posted by Peter Lau at Wednesday, August 31, 2011

oh my god, did you seriously get yourself all those cars...?

Anyway, EPIC trip! I wish I could have the time for this.