I just spent 1 week in Siem Reap, Cambodia. It was my first time being in Camb 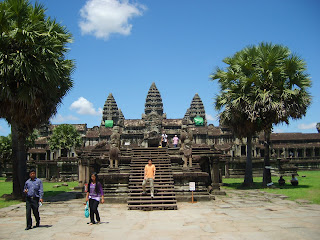 odia and I didn't know what to expect. The trip was great as it allowed me to spend some quality time with my Dad and it gave me some time to reflect.
Now, the main reason that I went to Cambodia was to see its famous man-made wonder of the world--Angkor Wat. It is a HUGE temple that has a 190 meter wide moat and was buil 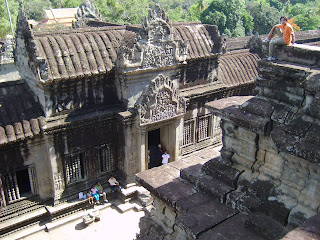 t in the 11th century (See picture above). After more than 1000 years, it still stands tall. I could not fully fathom how could the people actually built that place, given that there was no technology or equipments, or cars, or lorries during that time. All they had was elephants. Let me tell you this, Angkor Wat is extremely impressive. I can only imagine its full beauty and splendor during its glorious days. It is one of those places you must see in this lifetime. Absolutely must! 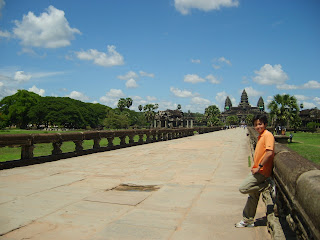 Besides Angkor Wat, I also went to visit the temple where Hollyw 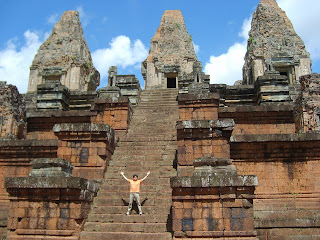 ood filmed the movie, Tomb Raider. It was really cool to be on the set where Angelina Jolie played Lara Croft. Much of the temple are in ruins but it was still awe-inspiring. The most distinct feature of the temple, if you could recall from the movie, is the trees growing from the walls of the temple. And those trees are enormous! From what I heard 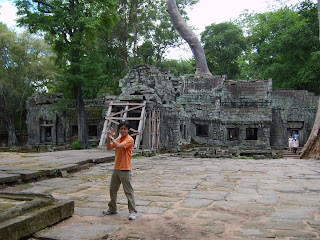 , after shooting Tomb Raider, Angelina Jolie fell in love with the country and goes to Cambodia every year, either as part of the United Nations or for a holiday. These days, Brad Pitt goes with her. And as you probably know, they had also adopted a child there. 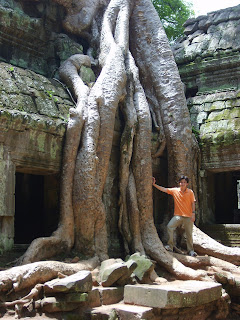 Cambodia is infamously known for its land mines. These were mines that were left behind during the many civil wars that Cambodia experienced. The problem with using such land mines is that, nobody clears them after the war, and when farmers go out to the field, or lumberers go out to the forest, the mines would go off. That was one of the reasons why Princess Diana went to plead with many countries not to land mines, or at least use self-deactivating ones--mines that will self-destruct over a set period of time. Before 200 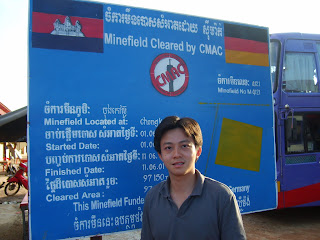 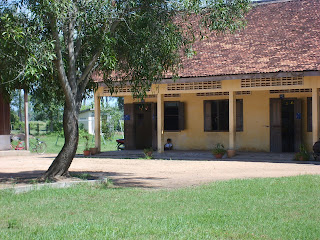 llowed by HIV and then land mines.

Apart from the sight seeing of the many temples, it saddens me to see how poor and helpless most of the people there are. Everywhere I went, there would be a throng of kids chasing after me asking me to buy some souvenirs. Most of the kids don't have enough money to go to school, and even if they did, the primary school there is not the ideal place to study. The conditions there is really, really bad. You can see a picture of a boy sitting outside the classroom in the school. (See picture above)

Many of the locals do not have electricity supply or a water tap. 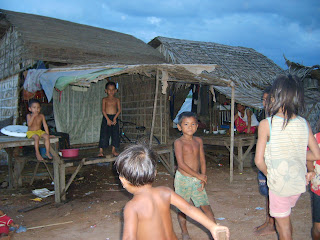 They use candle for light and they go to the well for water. I want you to take a close look at the picture on the left. There are 2 houses there side by side. This is how small their houses are. The whole house is probably the size of your room, or even smaller. Can you live in that kind of house? My Cambodian driver told me that the United Nations did more to help the locals than their own government. Even the wells were dug by oth 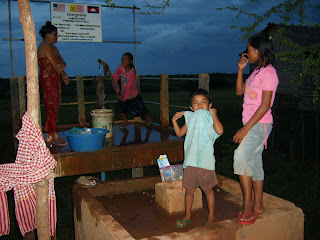 The last day I took a boat to the floating village. It is really a village on water. Their houses were built on water and it literally floats. They travel around by sampans, and some even by a pail. When I saw the boy in the picture below, I had a heavy feeling. I wondered how come this boy with a single arm can still be happy when so 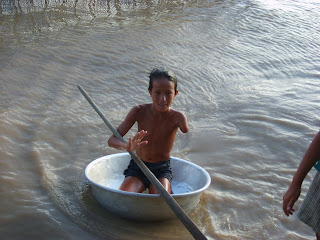 many other people are complaining about their situation? In a way, I was helpless. I did not know what to do to help. I could only pray.

This trip has reminded me not to take things for granted and to appreciate every little thing I have. I hope that you too, will count your blessings and give thanks in whatever situation you are in. You think you got it bad? A lot of people are in a worse situation than you. They are only fighting to survive.

"Don't complain about thorns among roses; be grateful for roses among thorns."--Anon

I believe that you got only one life to live on this Earth. So live life to the fullest and make a difference along the way! 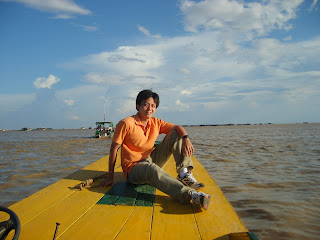 A few weeks ago, I got the option of watching Teenage Mutant Ninja Turtles or a movie called Freedom Writers. Sure, Ninja Turtles was my all-time favorite cartoon (and still is) but I was going into the cinema with 2 other people who might not find Turtles that could fight and walk on two legs very appealing. So I went for my second choice. And boy, did I make the right choice. This was the most meaningful movie I have seen in a long time. Freedom Writers was inspired by a true story and the diaries of teenagers after the 1992 Los Angeles riots, during the worst outbreak of interracial gang warfare. It talks about how a new teacher transformed the lives of her students when everyone, including her Head of Department, lost hope.

Students of different races were killing each other and beating each other up for no apparent reason. Naturally, no one was in the right mood to study. For most of them, their immediate goal was to stay alive. They are considered lucky if they can celebrate their 18th birthday. But this new teacher, played by Hilary Swank, came in and turned things around, even at the cost of going against the authorities. She was a great teacher, someone that we can all learn something from.

This show has so much wisdom that you simply have to watch it. I would do no justice to it by telling you the whole story. This movie is one of those few that brought tears to my eyes. So believe me when I say it is excellent. It is not showing in the cinemas now so if you want to watch the movie, go get the DVD. (Original ones please.)

After you watch this show, I believe that your LIFE WILL NEVER, EEE...EE...EVER, BE THE SAME AGAIN!