(Note: My blog is best viewed with Firefox browser)
I thought the air-con was better in this train because it was so cold when I slept. After midnight, the air-con stopped working and I felt that I was in Bangkok's Chinatown again. Only this time I was trapped in a small confined place and have no KFC to turn to.
Reached Nong Khai on time at 8:25am (after more than 12hrs) and quickly went to queue to buy ticket to Thanaleng, Laos. You can only buy train tickets to Laos when you are there in person. No way to buy online or any other station in advance. Costs only 20 Baht and takes 15mins to reach Thanaleng, after crossing the Lao-Thai Friendship Bridge.
Once there, I filled up the immigration form and got my passport stamped. I need to get to Vientiane (the capital and largest city of Laos) where I had pre-booked my hotel. It was either I take a Taxi (which costs 300 Baht), or share a tuk-tuk with 6 people (50 Baht each). I decided to save money and waited for others to get their passport stamped. Then a Korean girl came to me and asked me if I was traveling alone and how much it costs to get to Vientiane. Her name is Hyo Jin. I explained to her and she asked me to join her and 2 of her friends. That totaled up to 4 people. We need to get 2 more. So, she went to asked around and got 2 more Koreans (coincidentally) and we hopped onto the tuk-tuk and started to talk.
Not sure why most conversations with Koreans always end up with K-Pop and Girls Generation. Hyo Jin asked me if I like Girls Generation. And I said a bit. I told her honestly that I have no idea who Girls Generation was until someone told me about them and kept playing their songs in the office! She gave me the "are you serious" look, thinking that I must have known them since they are so popular, especially with guys. But I reassured her that I really didn't know about them. I think she still didn't believe. 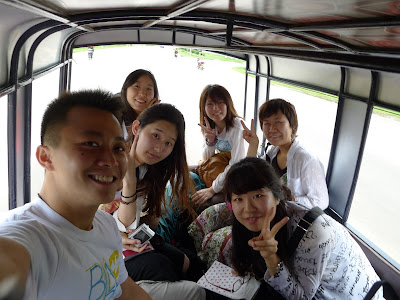 She handed me her notebook for me to write my contact. So now I have someone to look for when I'm in Seoul next time!
Was getting to know the girls a little when I reached my hotel. Things always happen like that right? I was the first to alight as the rest were going to the bus station. I quickly got down to tuk-tuk and said my goodbyes to the Koreans and went straight to the lobby to check-in. While I was talking to the receptionist, one of the girls came into lobby with her haversack and all, shouting at me: "the fee, the fee, the fee!" I was like "oopps!" I quickly passed the 50Baht to her with embarrassment and apologized. I guess they were probably thinking that I was some cheapskate who just wanted a free-ride to the hotel!
This is my first pit-stop after 3 days. Finally, I've a chance to bathe! Finally, I've a place to recharge my batteries (and all the other batteries for my gadgets).
(My first pit-stop with a HUGE bed) 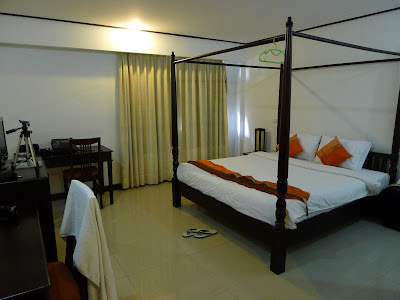 Currently, it is the rainy season in Laos and it was drizzling when I walked around. Went to the Mekong River, which is the 10th longest river in the world. This river runs through 6 countries (China, Burma, Laos, Thailand, Cambodia & Vietnam!) and it is estimated to be 4090km in length. It also forms part of the Lao-Thai border. Beautiful river.
(Mekong River. Where I am standing is Laos. On my left across the river is Thailand.) 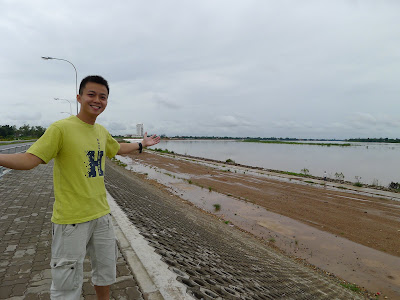 (The smile below reminds me of Gabriel. Yes gabe?) 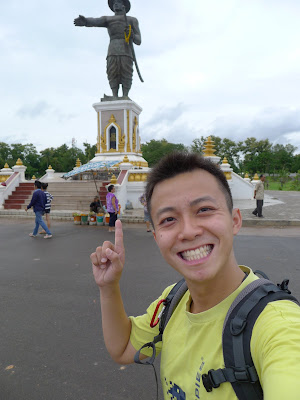 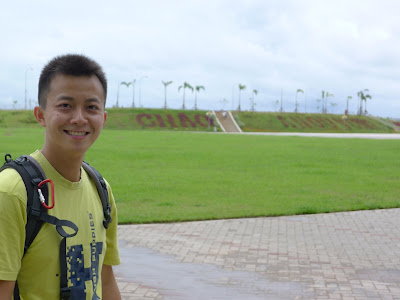 I'm not sure how much you know about Laos. Maybe like me, the last time you heard or read about Laos was from your Social Studies or History Text books. (I remembered seeing the Mekong River somewhere in my Geography text book though.) I think not many people know about Laos. For me, I had no expectations when I arrived here but I was pleasantly surprised. This place is peaceful and a lot of modern shops all over the city. The city centre is small and you could probably walk the entire place in 1 day. I'm also surprised at the number of tourists (mainly westerners) here, which probably explains the number of Western shops in the city. A very touristy area to say the least. 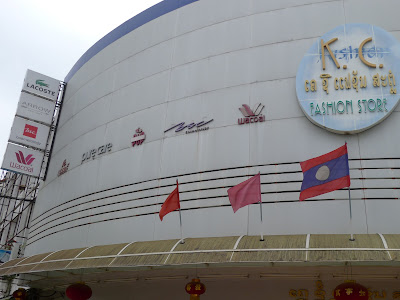 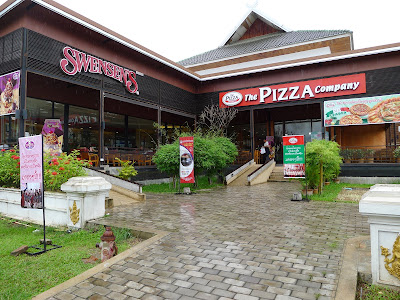 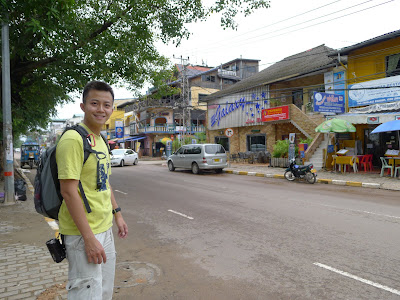 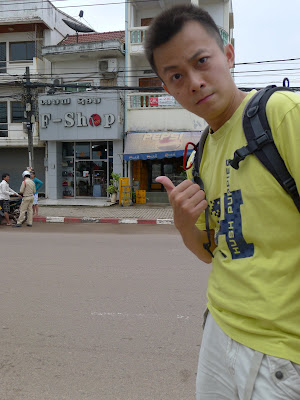 Laos do not have any sea port as it is surrounded by 5 countries. So Laos depends heavily on Thailand & Vietnam for its import & export. Hence, things are a little more expensive here compared to Bangkok.
Had lunch at a cosy cafe and they only serve Beef Noodle Soup. It was good. I would probably go back there to eat if I'm staying in Vientiane for more than a few days. It costs me 50Baht. I didn't bother to change to any Kip (Lao Currency) as I knew that most shops (but not all) accept USD or Baht. Furthermore, I was there only for 1 night. 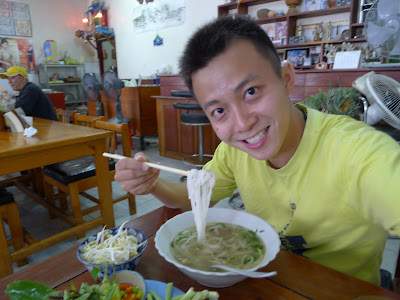 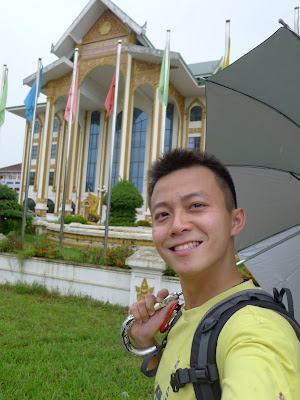 Explored a bit more and went back to the Hotel to rest. Then have to drag myself for dinner because I was too hungry not to eat. Saw a nice sunset on the way. Drank banana shake and ate Fried Rice. Salty....
(Vientiane Sunset. Ignore the umbrella, will you? The hotel was kind enough to lend it to me.) 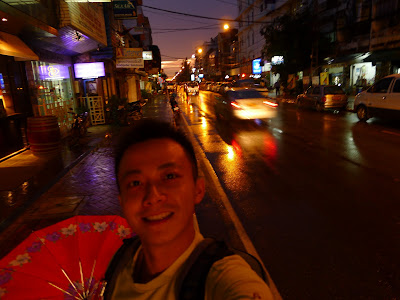 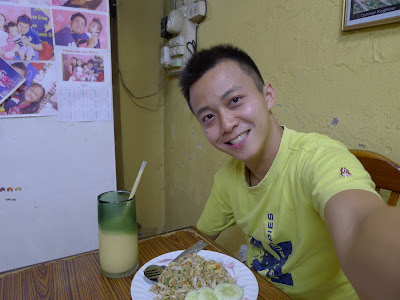 Breakfast was complimentary so I was a Happy Bird waking up early in the morning to eat. Edited my Day 1 video finally and decided to go for a walk. Went to the other side of town and walked through many markets. The thing is that most stalls sell the same stuff. Which I don't understand how they could survive with 90% of the stalls selling the same clothing, electronics, DVDs, accessories, etc.
(Presidential Palace. Which reminds me....I can't vote?) 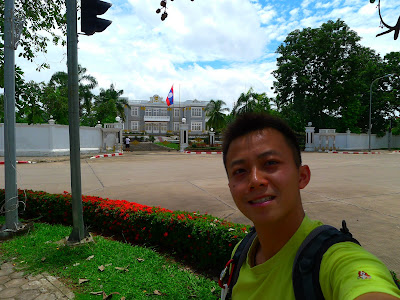 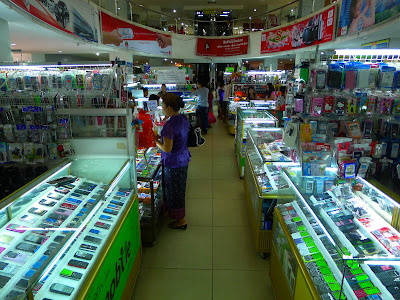 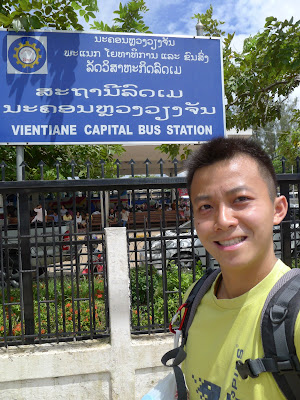 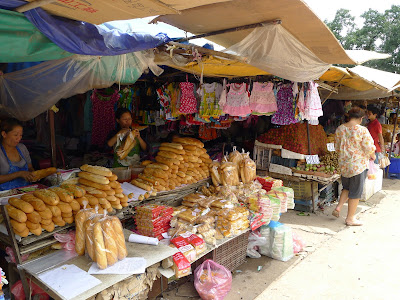 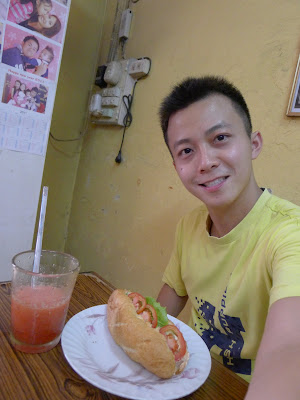 Went to a shopping mall and I thought I was teleported to Sim Lim Square. Walked for about 2 hours under the hot sun. At least, I don't have to carry my HUGE haversack this time round. Had lunch at about 2:30pm and I ate a Sandwich, which was sold almost everywhere I went. They use French Loaf for all their Sandwiches here. I forgot to mention that Vientiane was under the French-rule in the past, so understandably, this place is very much French-influenced.
The moment I stepped out of the cafe, the sky turned dark and was about to rain. I became an Angry Bird instantly. Ran back to hotel to wait for my pick-up.
I'm going to take the longest bus ride in my life!
(Oh, if you have not seen the Day1 video, please scroll down to the Day1 post to view it.)