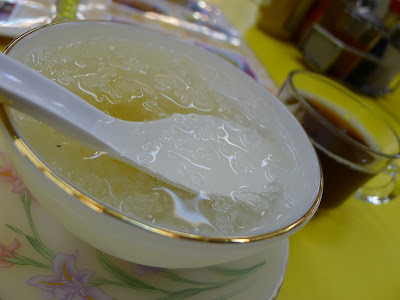 Caught a train from Hat Yai Train Station to Bangkok. 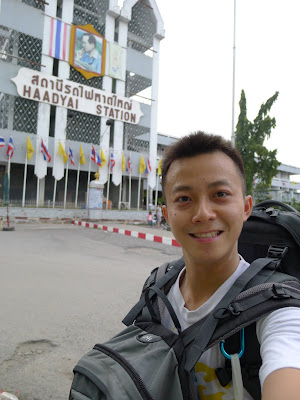 Oh the train is cool. I slept on the upper berth, which is slightly cheaper than the lower berth. I need to save as much money as I can, so I chose the upper one. Actually, as a child, I have always wanted to sleep on those double-deck bed. Not sure why I had that fantasy but I first got to live my fantasy while I was in the army!!! Suddenly, my fantasy turned into a nightmare.
(Inside the train. Before they set the beds.) 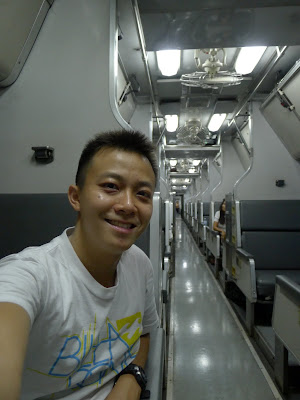 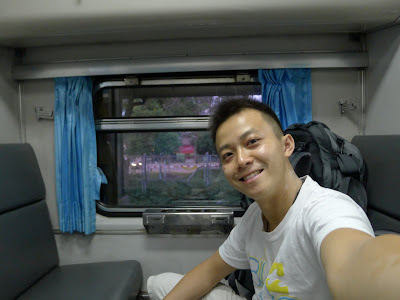 (On the Upper Berth) 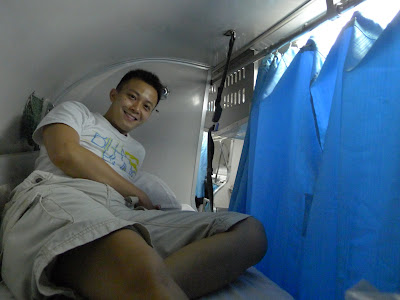 Anyway, the next day, I was talking to this other person on the train. He knew that I was Singaporean from the way I spoke. Arkom was friendly and he shared with me about finding my ancestral home in China. He said that when he helped his best friend to find his ancestral home, he was so touched that he teared. Quite an interesting conversation. One day I'll do just that. (By the way, we were conversing in Mandarin most of the time.) 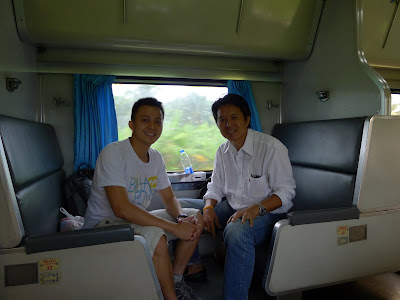 My train was supposed to end at Hua Lamphong station, which is the main Railway station in Bangkok. However, the train attendant informed us (in Thai) that we were stopping 2 stations before that because there the princess was scheduled to arrive at that station as well and the train is not allowed to enter. Fortunately, I have a local with me, and Arkom brought me to their MRT station in Bang Sue and taught me how to use the train (which is quite easy actually). I was very impressed with their MRT. They have a system almost identical to the one in Singapore. As far as I can remember, I have no recollection of the MRT in Bangkok when I was there more than 12 years ago. Clearly this must be quite new. I later found out that it was officially opened in July 2004.
(In Bang Sue Train Station) 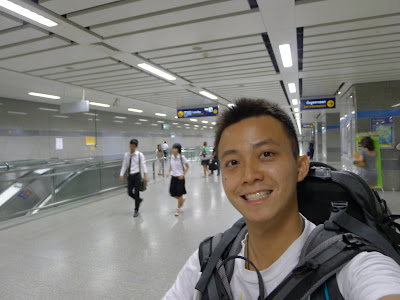 (In the train. Looks familiar?) 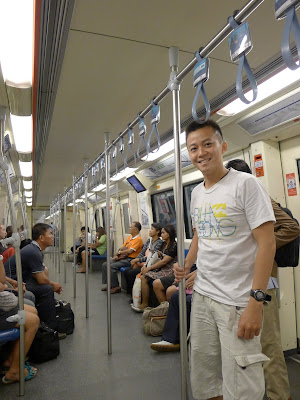 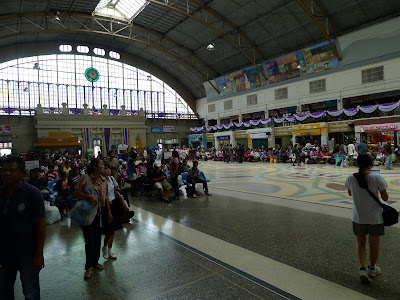 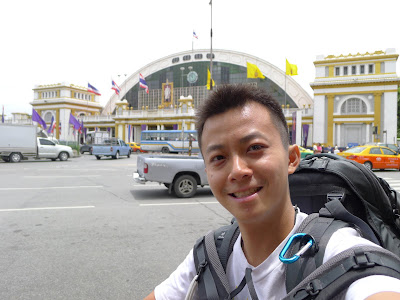 Arkom alighted 2 stops before mine. Bang Sue is the first stop and Hua Lamphong is the last stop. In other words, I took the entire MRT line from one end to the other. It costs me 40 Baht (and Arkom was nice enough pass me 10 Baht because I only had 30 Baht worth of coins at that time), which I need not have to pay in the first place. I asked for directions to Chinatown and took a detour, because some roads were blocked, and ended up walking for 20mins under the BLAZING HOT SUN, carrying my HUGE haversack and a day pack! I tell you, I was perspiring like nobody's business.
(In front of Chinatown Gate) 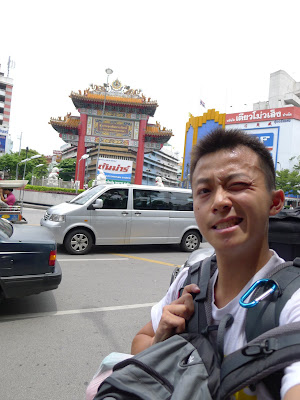 Oh, the reason why I had to carry my HUGE haversack around is because I was to be in Bangkok for less than a day and my next train was scheduled to depart Bangkok at 8pm. So I had the whole afternoon to explore the place. But I had no place to leave my HUGE haversack.
Chinatown is a lively place, with a lot of shouting and people moving around. There are so many alleys and small lanes within the alleys that it must take a full day to navigate the whole place. The narrow walkways and heavy human traffic made it incredibly difficult for me to move around. Crossing the road already requires some skill. Bear in mind that I was still carrying my HUGE haversack.
(This is how they cross the road here) 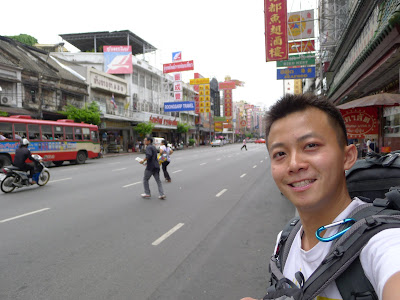 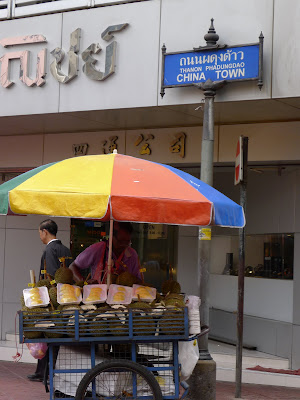 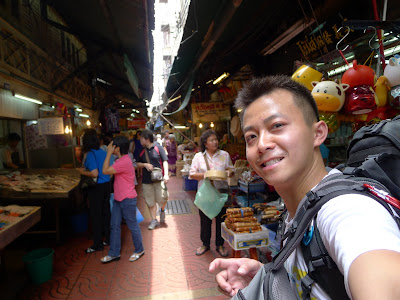 After 1 hour of walking, I sat down at a roadside stall and ordered whatever that they were selling. I didn't even know what it was and I just told the lady "1 bowl". It turns out to be Beef Ball Noodle Soup, which was quite tasty. The taste kinda reminded me of "Bakso" in Indonesia. And I love Bakso! I thought I was in Indonesia for a moment. The best part? It only costs me 30Baht. (SGD$1.20)
(My "Bakso") 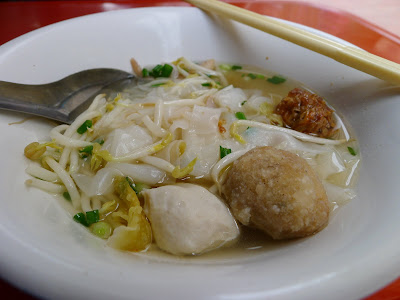 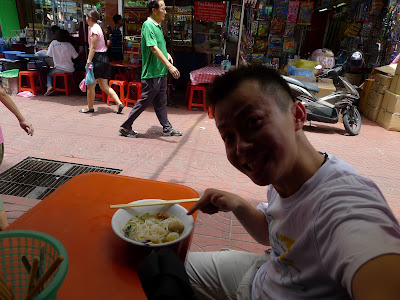 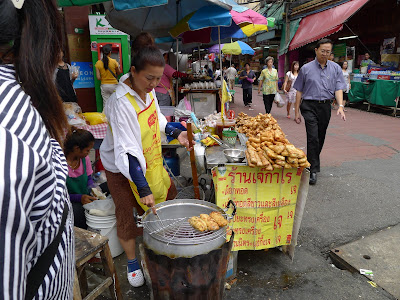 After that, I went to a nearby KFC to sleep! Yes, I was so tired that the moment I sat down on the chair, I fell asleep on my bags! Finally, a place with Air-Con. That was my afternoon nap.
Continued to walk the whole stretch of Chinatown and found some interesting lanes. There was one lane that sells nothing but Spectacles/Glasses. It was just optical shops all the way. Then, there was another lane that sells nothing but Shoes!!! Girls, this lane was created just for you. I felt out of place there you know. 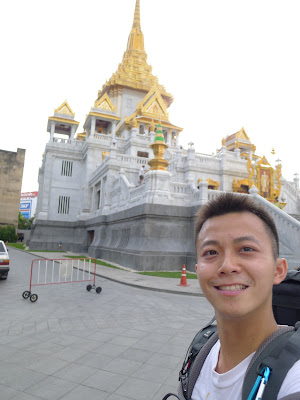 I guessed I've seen enough for the day and decided to go back to Hua Lamphong Railway station. My legs were aching and was contemplating if I should take the tuk-tuk back. The thing is, I didn't bring a lot Baht with me and I wanted to save as much money as I can because this was still the beginning of my trip. After being "cheated" in the morning to spend money on the public transport (i.e. MRT), I decided not to take any more public transport, no matter how tempting the tuk-tuk was. (And it was really tempting as the tuk-tuk drivers kept honking at me.) So I used my own private transport - my legs. Remember that I was still carrying my HUGE haversack. In the end, I walked back to the station with my head held high. (No, actually I was looking down and panting.) 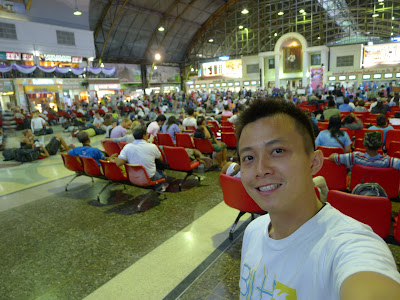 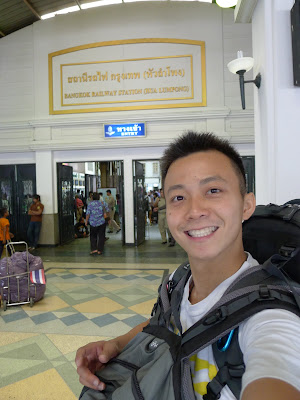 It was still early and I went to another KFC to wait. At least, the KFC at the station has air-conditioned cooler than the station itself and much cooler than the KFC that I went in Singapore! Was resting for awhile before I counted how much Baht I had left and decided to eat 1 egg tart and 2 pcs of chicken.
There were so many westerners walking in and out while I was eating. Then there was this beautiful blonde girl (with her family) smiled and nodded at me. I had chicken in my mouth but I had to smile back right? That was probably the most "unglam" smile ever.
Waited for awhile more and finally it was 7:30pm. I headed over to the platform where the train was.

(This is the train that the princess took, I think.) 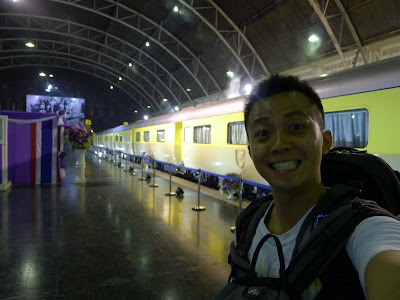 (This is the train that I took, definitely.) 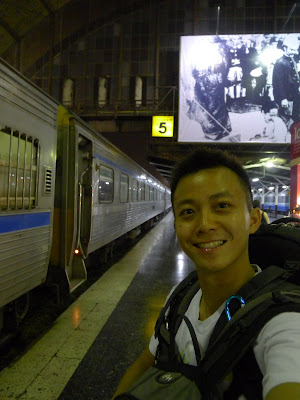 This train is from Bangkok to Nong Khai, which is near the Thai-Laos border. This is the easiest way to go to Laos from Thailand. This journey took 12 hours, which was nothing compared to the previous night's train ride of 15 hrs 30mins. The type of train is the same as the one I took the night before. So I was used to it already.