Slept for 2-3 hours the previous night. Some anxiety about my 6 Days Train ride to Russia. This train will take me through 7 time zones!
Carried my HUGE Haversack, Day Pack, & 4 Plastic Bags worth of food, drinks and other items.
The short walk to Beijing Railway Station almost killed me. I realised I bought too much! Typical Singaporean huh? 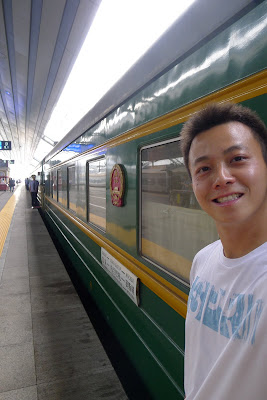 Got into my 1st Class Cabin (hey, this was the only time I splurge ok. So don't look at me like with those eyes) and I was grinning ear to ear when I got in. 2-bed cabin and I was the only one occupying it! Comfortable!

There was an attached shower room in my cabin! The toilet is at the end of each carriage and is shared of course. It was decent. 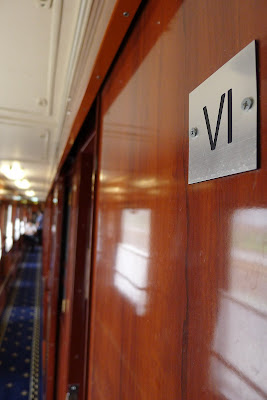 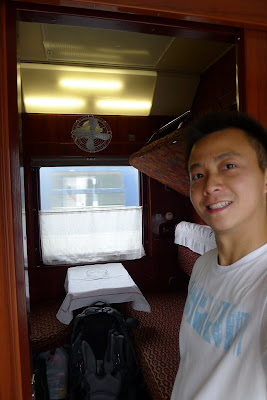 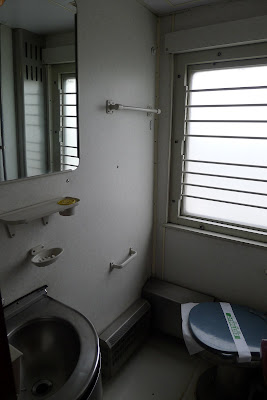 Many people asked me what I'm going to do for 6 days on the train. 6 days! I really don't know. But I know that I'm not worried about it.
Got a free Lunch and Dinner for that day. Was surprised that they actually provided meals, well, the first 2 at least. I read online that you have to pay for the meals.
Sunset was stunning. I was in awe at God's creation. Spent the whole evening admiring the sunset. It turned out to be the most beautiful sunset in my 6-day ride. 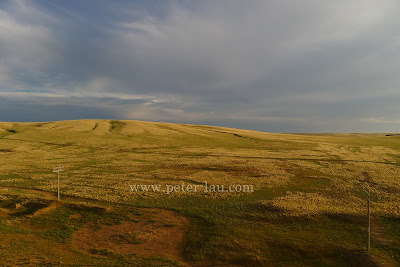 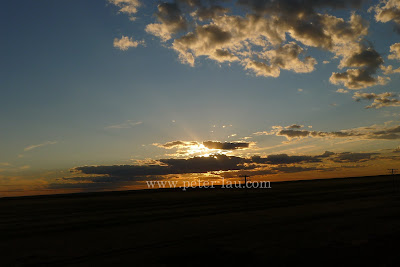 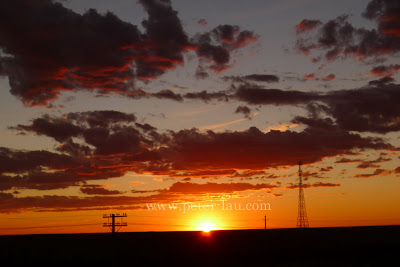 Reached China's Immigration Checkpoint at Erlian Station. Waited for a couple of hours while the wheels of the train are being changed. Reason? The tracks in Mongolia and Russia are different from China's. 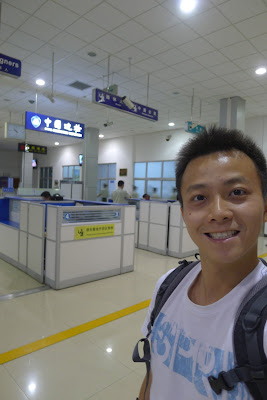 Now on to Mongolia's Border. Interesting. They got their customs officers (in Green Camouflage Uniform) to check our cabins. And they actually speak English and Mandarin. A female officer came to my cabin, saluted me, and said, "Out". And out I went. Stood outside my cabin and saw how she checked my cabin. I don't know, I just found the whole process interesting.
Another officer came to collect our passports and we waited in the train. I am always jittery when the officers take my passport. And that wasn't my first time. I feel weird traveling without my passport with me, even if it is just for a few minutes. Hey, you never know what can happen right?
18 Aug 2011 (Day 18)
Made breakfast. Bread with Tuna spread. Ate it while watching the world (well, Mongolia) pass by. 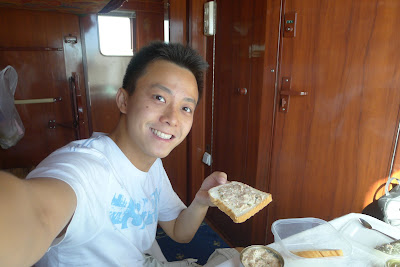 Went past Gobi Dessert. Sands & dunes surround me as I continued watching. Didn't take pictures of it as I was still half asleep.
Had cup noodles and canned Unagi for lunch.
As we go further up North, the grass gets greener and greener. And of course, more and more people. 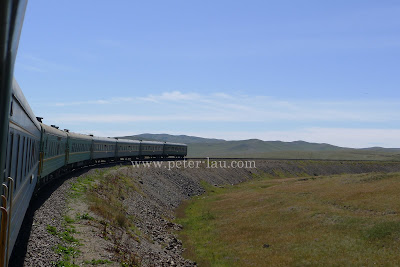 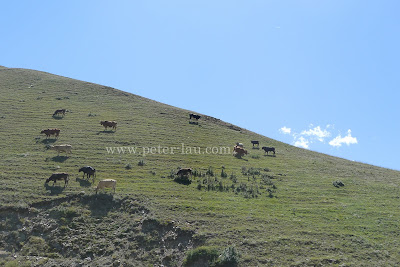 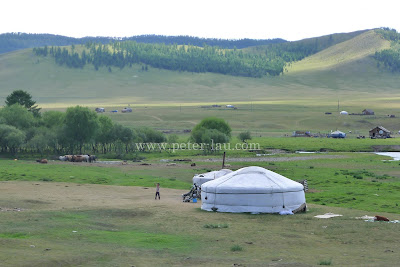 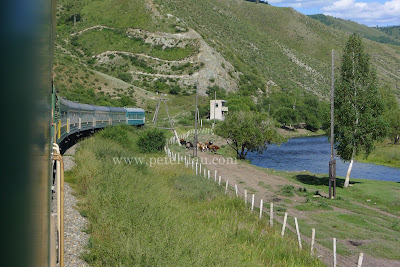 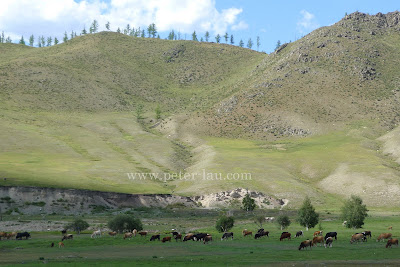 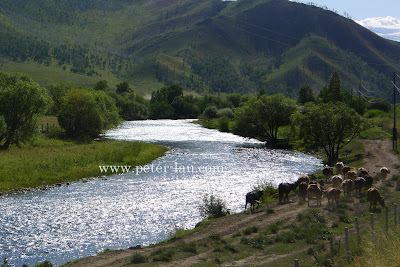 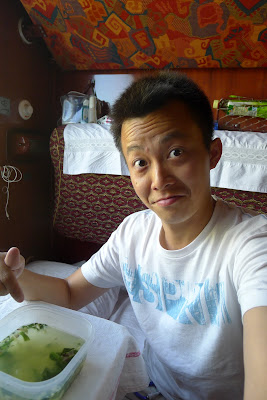 We were allowed to hop off and on the train when the train stops at different stations. Not for very long though. For the most part, it was for 10-15 mins. It was good nonetheless. To be able to get off the train to stretch a little and to catch a glimpse of the place.
1:20pm. Arrived at the capital of Mongolia -- Ulaan Baatar. Wow! At that moment, I sort of thought that I was living in a well all my life. I didn't expect Mongolia to be like this - with high-rise buildings and structures. I have always thought of Mongolia as a huge dessert with Tents and Horses, where Genghis Khan rule. Don't you have that impression of Mongolia? Come on, admit it!
(Ulaan Baatar - Mongolia's Capital) 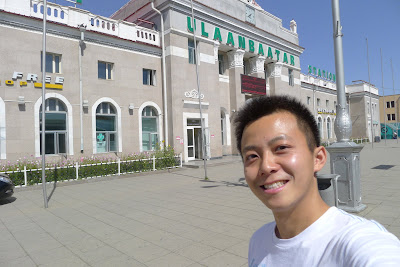 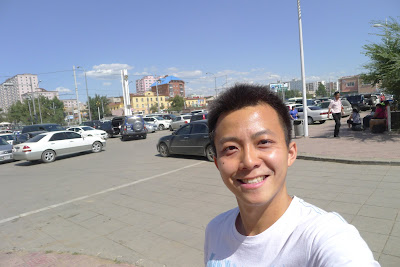 I will explore the place next time!
The landscape is simply gorgeous as I continued my train ride. With mountains, rivers, lakes, Mongolian tents & horses (without Genghis Khan, of course!).
Crossed the Mongolian-Russian border at night. Same thing. Took my passport in Mongolia. And waited. Was so happy that I reached the Russian border, until they came and took my passport. Now, a Russian officer came to check my cabin. Then another officer checked again. Then another officer took a Siberian Dog to sniff the carriage. Then waited for my passport. The moment I got it back, I turned to the page where the Russian Immigration Stamp was and starred at it for awhile. Can't believe that I'm officially in the Russian Federation!
I'm still in Asia though. Russia is actually in 2 continents - Europe & Asia. Hence, it is in this super-continent called Eurasia. One thing to note though; most people refer Russia as a European Country. I'm in the Asia part of Russia.
19 Aug 2011 (Day 19)
Made breakfast. Bread with Tuna spread again.

In Siberia and the landscape is made up of trees. And more trees.

Then I saw the world's oldest and deepest lake -- Lake Baikal. It was nothing short of spectacular. "The Pearl of Siberia" is definitely a place to visit. If you love clear waters and nature, this is the place for you. 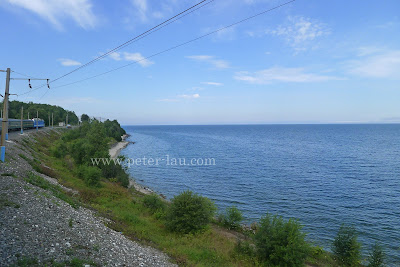 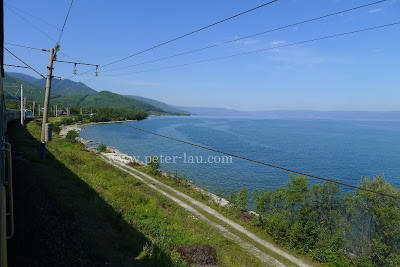 Did some reading and thinking. Was a good time alone.

Lunch was cup noodles and canned food, yet again.

I realised that I was eating too much and decided to exercise a bit. Need to do some workouts! So in my small cosy cabin, I did stretching (from head to toe), push-ups, crunches, sit-ups, bench-press, and even jumping jacks! Ok fine, I didn't do the last one. 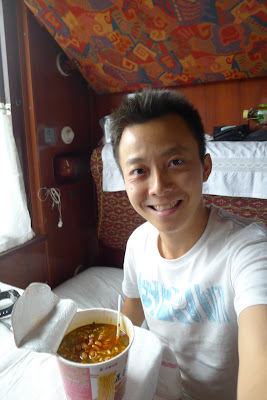 Did more reading and thinking. I liked the solitude. 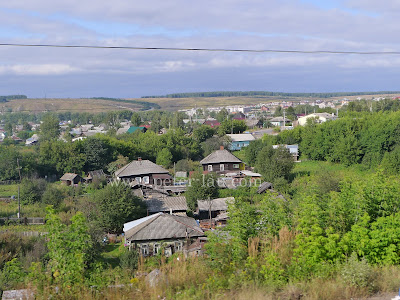 Then the time came. 12:45pm. I finally crossed the Asia-Europe border, which is marked by a White Obelisk. I was on the train when it happened and it happened so fast. I literally jumped for joy!!!

I made it to Europe by Land from Singapore! I was super triumphant!

I fulfilled one of my Dreams!

Hey, it was anything but easy. Traveling alone with 2 bags and 2 cameras? Crazy.

Thank God for keeping me safe and for sending Angels throughout my journey! 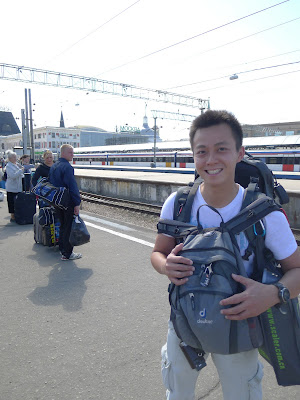 I really wish I could go for such a train ride. Just watching the scenery, marveling over the natural beauty of these places. Mongolia, Russia and China are beautiful places.

It's hard to believe you were only in Singapore 2 weeks ago, right? Or in Hanoi, Bangkok, south east asia...

Hi Peter.
Ryan from the June Camp here. Out of curiosity. Is the Trans-Siberian Express's coaches connected to the locomotive? As in with a walkway between them?