Arrived in Munich at about 10am and I didn't book any accommodation! Well, that was because I wasn't intending to stay over in Munich. And the reason? The Oktoberfest was on and all the prices were crazily inflated. Accommodation rates could go up to more than twice the usual rates! I wasn't going to pay that premium.
So I left my HUGE Haversack in the locker in the Railway Station and went to explore Munich.
(Karlsplatz) 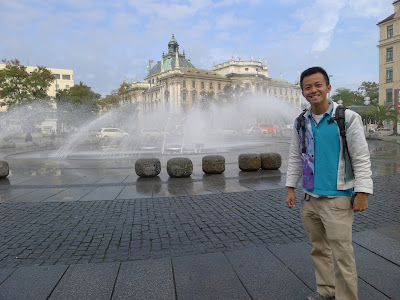 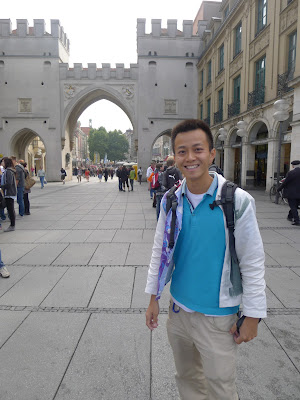 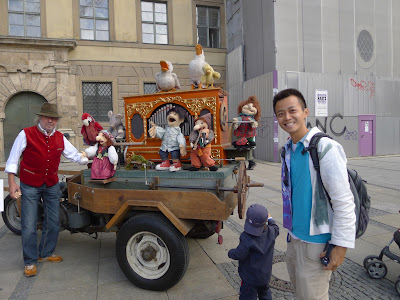 Germany is known for its beer, sausages and pork knuckle. And the thing about German sausages is that each city in Germany has their own special and unique sausage. So different city is known for different types of sausages.
The Weisswurst ("white sausage") is a Munich specialty. It is a breakfast sausage that is traditionally eaten as a late breakfast and available in restaurants until 12 noon. Personally, I think the white sausage was ok only and not something that I will eat again. Just wanted to try their local food.
(I'm holding the bowl of Weisswurst) 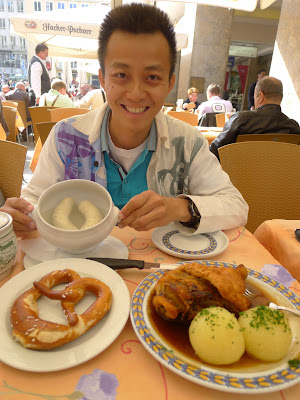 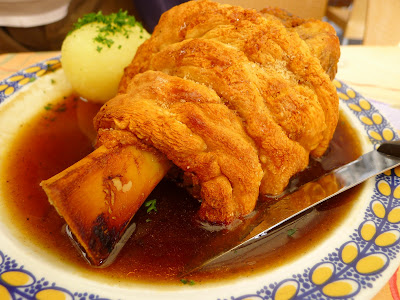 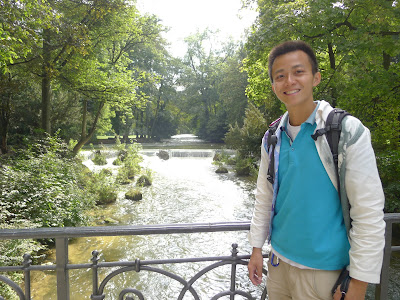 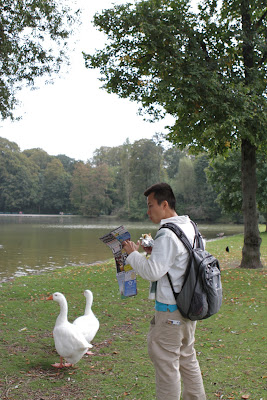 At the mouth of the artificial stream that runs through the English Garden, there is a standing wave that is produced by the water pumping mechanism. And there I saw something amazing! I saw surfers surfing on this wave!!! The stream is not very wide and it was definitely a sight to behold. I mean, I have seen surfers surfing near the beach but it wasn't anything like this! 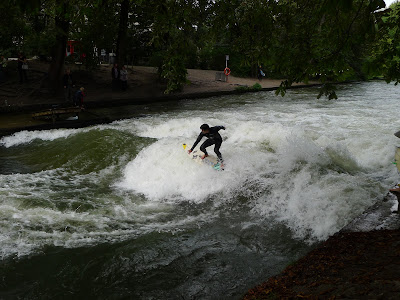 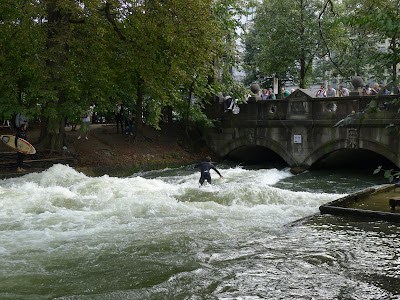 After a beautiful walk in the English Garden and after seeing surfer dudes surfing in a narrow stream, I took the U-Bahn (subway) to newest Football Stadium in Europe - Allianz Arena. It was opened in 2005 and was one of the venues for the 2006 FIFA World Cup in Germany. 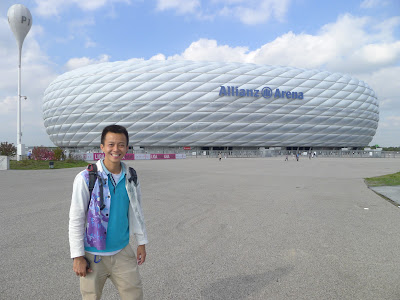 The Allianz Arena is the home ground of FC Bayern Munich and TSV 1860 München. It is also the first stadium in the world that has a full changing colour outside. I've seen pictures of the stadium at night and it is really stunning with different colours.
Next up, I went to Oktoberfest! I can't believe that when I was in Frankfurt, the Frankfurt Auto Show was on, and when I was in Munich, the Oktoberfest was on! So fortunate to have such coincidences during this trip. I heard that people actually fly to Munich just for the Oktoberfest! For me, I just happened to be there. 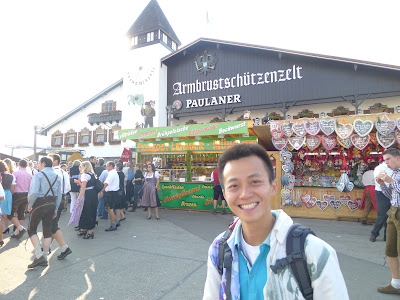 I simply couldn't give up the opportunity to go to the Oktoberfest. This is a once-a-year beer festival that is held in Munich since 1810. And if you have noticed the date that I was there, it wasn't even October yet! It was still 22 Sept. Yes, the Oktoberfest is not held in October!!! What an irony! Ok, to be fair, it usually runs from late September to the first weekend of October. So it does happen during October, although most of occurs during September. 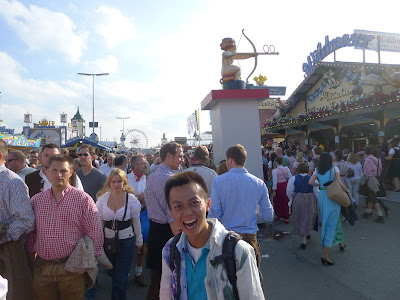 By the way, this is the world's largest fair, with more than 5 million people attending every year! The festival is held in the city with a land area of more than 100 acres dedicated to beer tents, food kiosks, and fairground attractions. Yes, apart from beer, there is a huge theme park in the vicinity. So if you don't go there to drink, it can be a nice outdoor carnival for the whole family.
I was overwhelmed when I was there beacuase the whole place was jam-packed with people. Drunk ones included! Most ladies were dressed-up in barmaids costumes and the guys wore Lederhosen.
Each of the major breweries has their own beer tent that is filled with traditional musicians leading the crowd in well-known drinking chants, and incredibly strong barmaids hoisting 10 or more huge glass beer mugs! Those 1-liter glass beer mugs are heavy even when empty! Just imagine.
Each beer tent is unique and has a different theme. I was totally impressed when I stepped into the beer tents. The decorations and atmosphere inside the tents were off the charts! I could only say "WOW!" 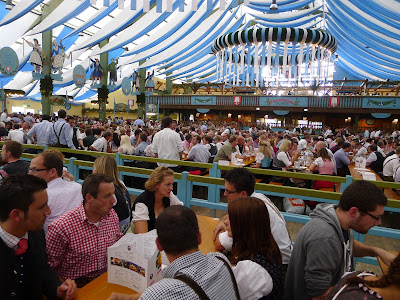 The tents are usually overcrowded and it is not easy to get a seat. Unless you are there early. As a general rule, you won't be served if you don't have a seat. 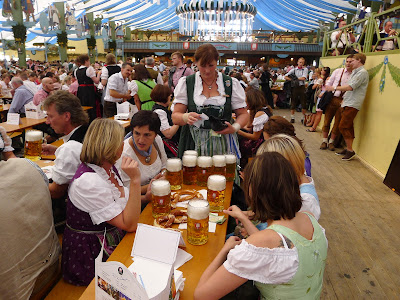 I don't drink beer but I wanted to soak in the Oktoberfest atmosphere so I found a place outside the tent and drank Coke! I know, what a joke!
I think the barmaid taking my order was laughing at me. And I believe that I was the only one there drinking coke! Hey, at least I'm not shy to admit it!
(At Oktoberfest drinking coke! That is not Stout ok!) 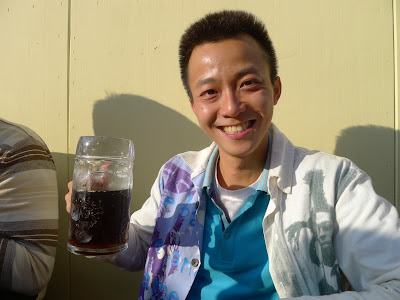 Ok, stop laughing at me will you! What is wrong with drinking Coke at Oktoberfest? 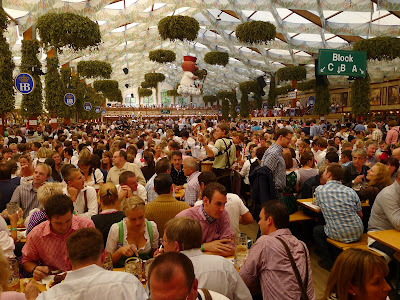 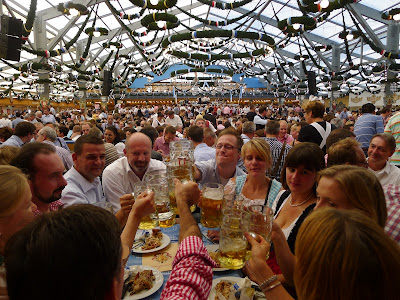