Took the train early in the morning from Barcelona and headed to the Capital of Spain - Madrid.
I felt a lot safer in Madrid because I heard a lot of horror stories about Barcelona. Be careful if you want to go to Barcelona. It is known as Europe's pickpocketing capital!
Anyway, I love Madrid! Compared to many other European cities, Madrid do not have many so-called "Famous Tourist Attractions". But I like the culture, lifestyle, people, and FOOD here! Only thing I didn't like: the weather!! It was super hot! Almost like Singapore, just that it wasn't humid.
Despite the heat, Madrid is definitely one of my favorite cities.
After I checked in, it was already 1pm.
Walked around to explore the Spanish Capital.
(Opera House) 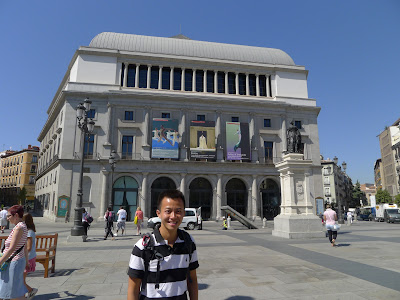 (In front of the Royal Palace) 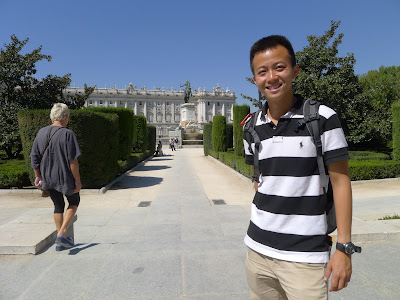 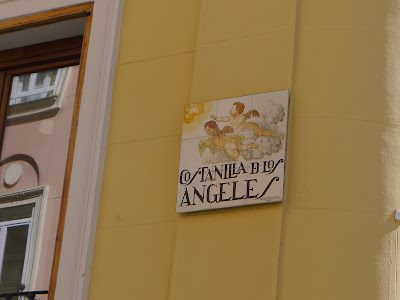 It is so cute, don't you think? It all comes with illustrations as the background.
(A street in Madrid) 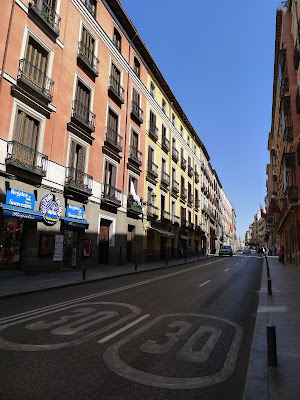 Then I found a SUPER Good place for FOOD!!! The place is called Mercado de San Miguel and is one of the oldest covered market in Madrid. Almost 100 years old!
There are 33 stalls inside and you can just go walk around to buy food from different stalls and sit at bar stool to eat. If there isn't any place, you stand and eat! I really like the atmosphere there.
(Mercado de San Miguel) 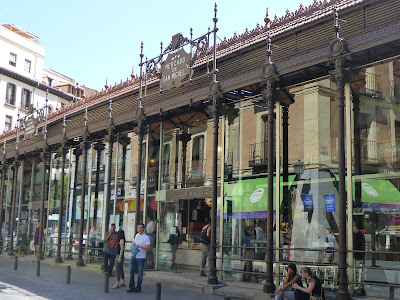 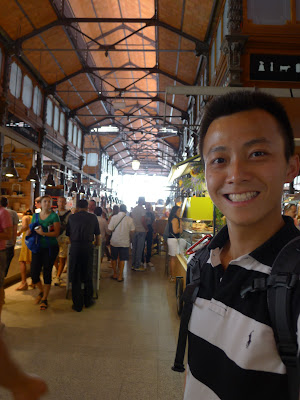 I was looking around and I was certainly spoilt for choice. So many varieties of meat, seafood, cheese, vegetables, fruits, and drinks. Spain is known for its cured meat (preserved meat). And it is eaten raw. I went to the stall and the queue was long. I even had to take a queue number to wait for my turn to order!
It was definitely worth the wait because the meat was simply yummy!!! Quite salty though. But of course, salt is the major preservative used.
(Eating cured meat) 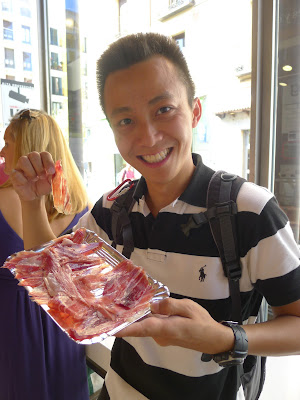 While I was eating cured meat, the aroma from the next stall was overwhelming and I just had to check it out. They were cooking beef steaks and beef patty. The beef burger was the cheapest item on the menu so I ordered that. And it was yummy too! Very juicy!
(Eating beef burger) 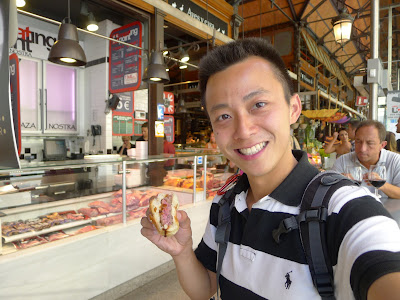 Mercado de San Miguel is a place that I would want to go again. I think I can spend a few hours there just trying all the food and chilling out. You should visit this place if you ever go to Madrid.
(Plaza Mayor) 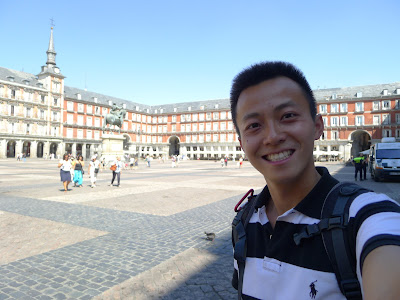 As if I have not eaten enough, I went to a restaurant near Sol Metro Station to have lunch! It was recommended by the hostel staff. The food here is definitely one of my top 5 favorites during this trip! The waiter was really friendly and the food was really good! With good service and good food, what more can you ask for? (I know, more food.)
Even before I started ordering, I was already given a free plate of chicken wings & drumsticks! Not bad huh?
(Lunch at Alhambra Restaurant) 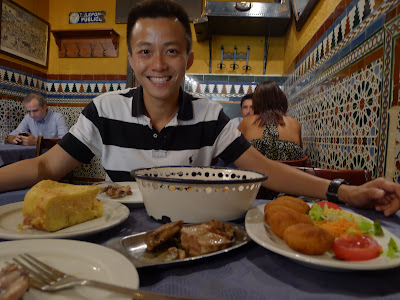 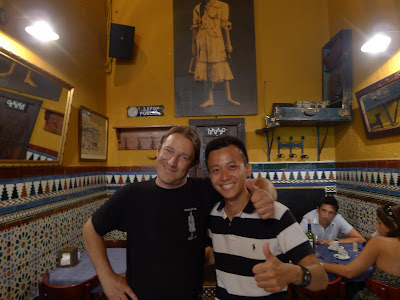 Spanish food tastes quite similar to Asian food, so maybe that was the reason why I loved it so much.

Went to CaixaForum to see the Vertical Garden designed by Patrick Blanc. 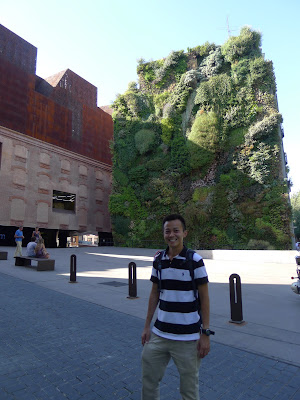 Nice?
(Gran Via - "Broadway". The main street in Madrid) 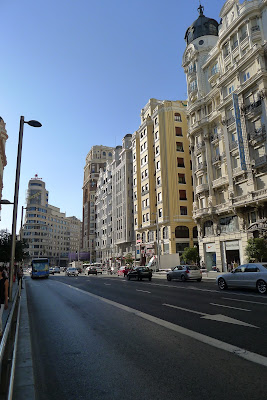 I went back to the hostel and watched a Football match between FC Barcelona and AC Milan. The match was at Nou Camp, and I was there the previous day! Quite funny to watch a Barcelona match in Madrid. They are arch rivals just in case you don't know.
14 Sept 2011 (Day 45)

I thought about where I wanted to go today and couldn't find a place that I really must go. So I decided to go to the Santiago Bernabeu - home of Real Madrid C.F. 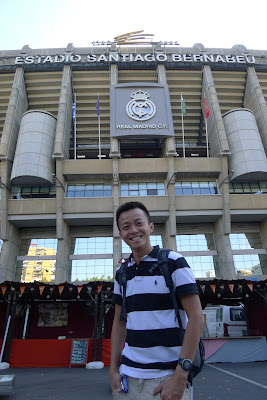 As I was walking into the stadium, I saw a familiar face. Yes, it was unmistakable. It was.....it was.....Christiano Ronaldo! I waved at the most expensive player in the world and said "Hi". Christiano Ronaldo then winked at me! I could totally melt in that instant!
Then I realised that I was melting because of the blazing hot sun!!! And I got out of my hallucination! Hey, don't blame me. The sun was so hot that I think my brains was scorched. In circumstances like this, hallucinations are normal ok? 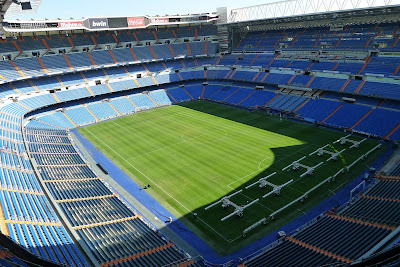 (See, I told you I saw Christiano Ronaldo!) 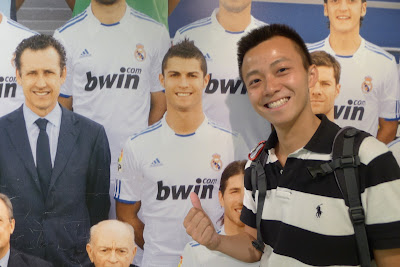 (Can you see? "Jesus in first place") 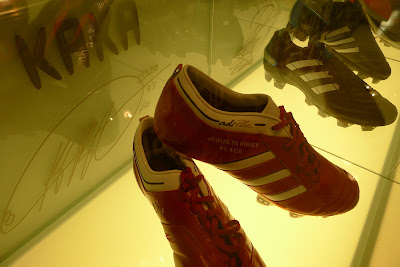 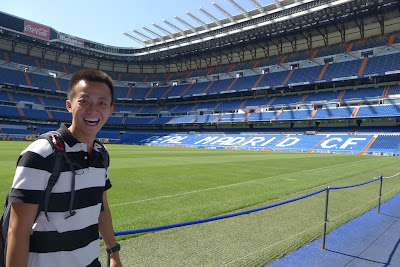 (I was doing my job as a Manager) 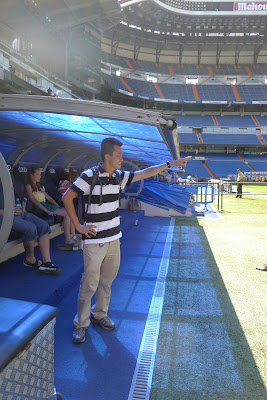 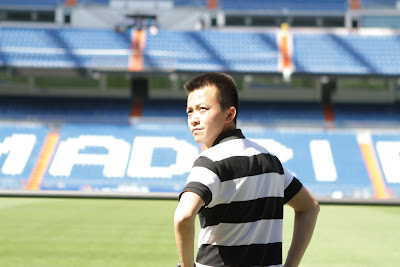 (I was focusing on the match. See my Assistant Manager beside me?) 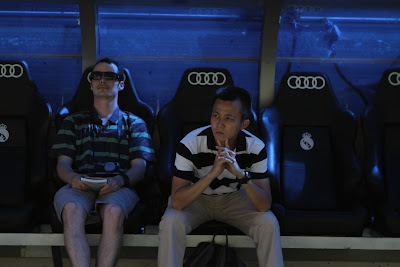 (Then I had to do a post match press conference. Not easy being a Manager you know!) 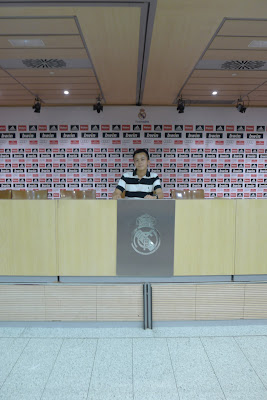 After all my duties with Real Madrid CF, I was feeling hungry. I liked the food so much at Alhambra Restaurant that I had to go back there again. This is one of the very few restaurants that I went back a second time during this whole trip to Europe. 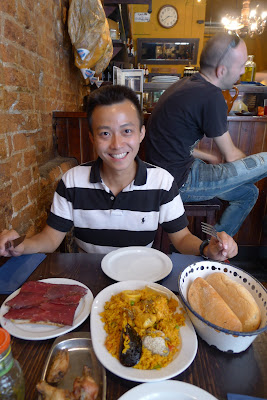 This time, I ordered Paella, a typical Spanish Cuisine that originated from Valencia. It is the yellow rice dish in the middle of the above photo. It looks like Nasi Briyani and tastes like Nasi Briyani. They are similar yet different. And the difference is subtle.
Spain is also known for one other thing -- Bull fighting. I took the Metro and went to Plaza de Toros de Las Ventas. This is a famous bullring in Madrid and is regarded as the home to Bull fighting in Spain.
Unfortunately for me, the bull fighting season is during the month of May. So I could only see the exterior of the bull fighting arena.
(Plaza de Toros de Las Ventas) 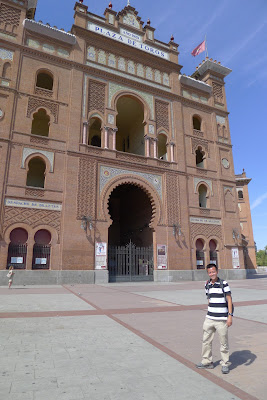