Cannes, France
So after sleeping at 7am, I woke up at about 10am.

Went back to the train station to go to Nice.

Arrived in Nice in less than 30mins.
Nice is not nice. I mean, Nice is very nice. But it is pronounced as "Niece".
Nice is really nice. It is famous for its pebble-stoned beach. The whole stretch of beach is covered with pebble stones instead of sand.
The beach in Nice is popular for sunbathing. And many ladies were sunbathing topless! It was my first time at a "topless sunbathing beach"! Since this is a PG-rated blog, I can't show you pictures that are not supposed to be shown.
The view is really nice! I mean the beach and the Mediterranean Coast, of course. 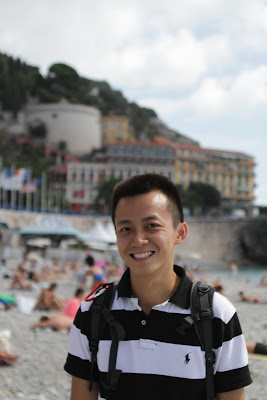 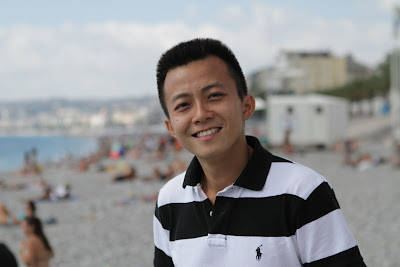 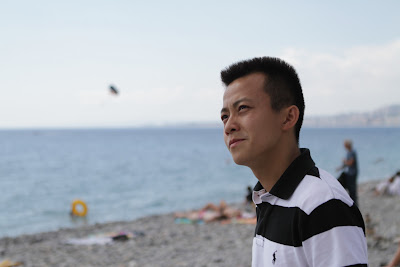 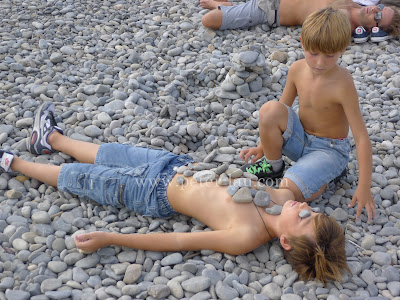 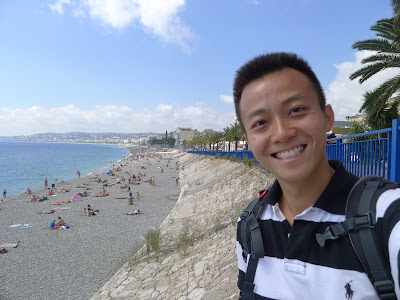 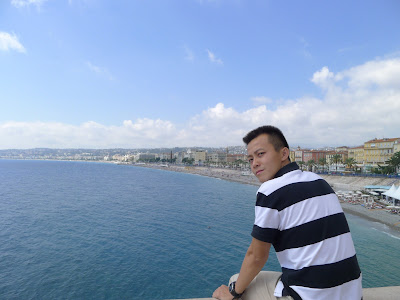 Walked along the beautiful beach some more and I went back to the train station. Now, off to Monte Carlo.
Monte Carlo, Monaco
The train ride from Nice took less than 30mins. And I arrived at the home of the F1 Monaco Grand Prix!
Monaco is the second smallest independent state in the world and is the land of the rich and famous. Of course, Monte Carlo is known for its casinos and its beautiful coastline. 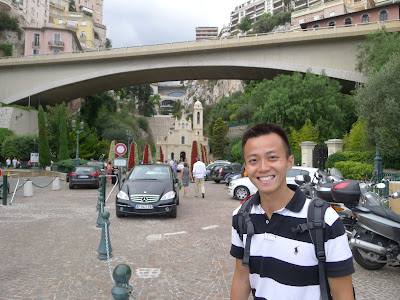 (See my yacht over there?) 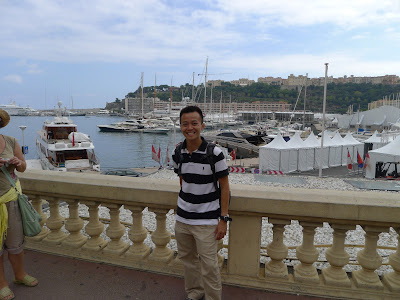 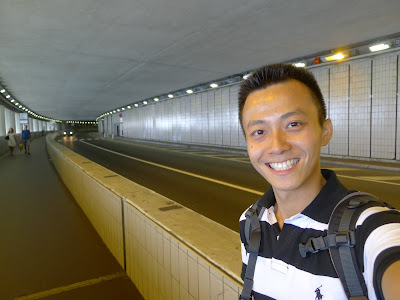 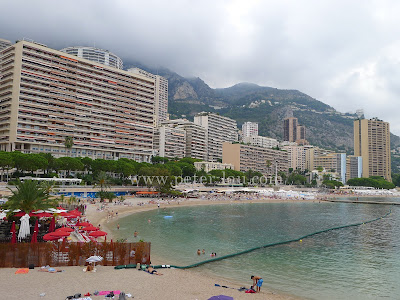 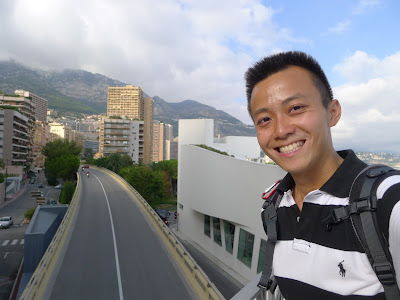 I walked a around Monte Carlo for a few hours. And the place is like nothing I've seen before. The pictures and videos that I've seen do not do justice to the city. You have to go there to see it!
The city is beautiful. Even the cars are!!! Everywhere I went, I saw super luxury cars. It is no big deal there. It is common! Very common. I think Monte Carlo has the highest concentration of luxury cars in the world.
Went to Monte Carlo Casino, which is the most famous and the main Casino in Monte Carlo. This was also the location of a few James Bond movies. I wanted to go in to have a look (not to gamble!) but there was a entrance fee. I didn't want to pay for that. However, just by walking to the ticketing booth inside the building, I could see its splendor. It is very grand. Just like a palace. 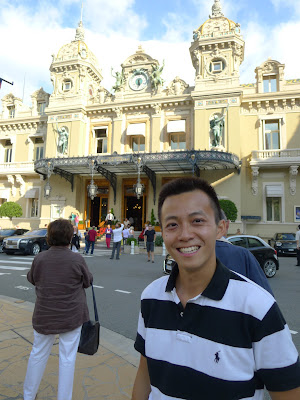 Monte Carlo is a glitzy place. But there are certain places that are relaxing and quiet. I like that! A lot.
For those of you who are car-racing game junkies, Monte Carlo is often featured as a location in the video game series, Gran Turismo.
Took my Ferrari (I mean the train) and went back to Cannes.


Cannes, France
It was about 7pm when I arrived back in Cannes.

Cannes is not Cannes without the Cannes Film Festival. It is the most prestigious film festival in the world and it takes place in May every year. After going to the Venice Film Festival, I'm just excited to be in Cannes.

I went to Palais des Festivals, where celebrities and stars gather and watch films screened during the film festival. 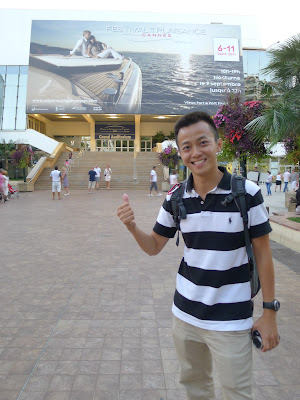 There are 22 steps leading up to the entrance. 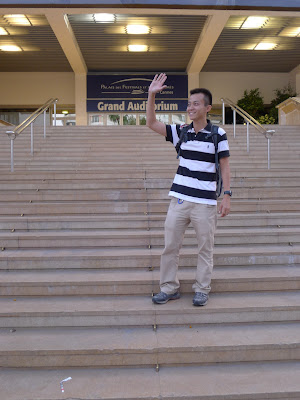 (See the moon at the background?) 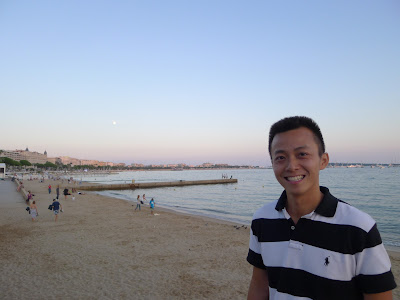 Walked along the world's famous street - La Croisette. It is just beside the sea and is known for its luxury hotels and boutique shops.
(La Crosisette) 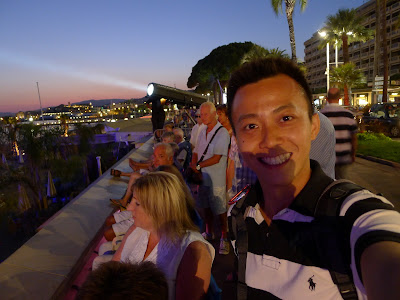 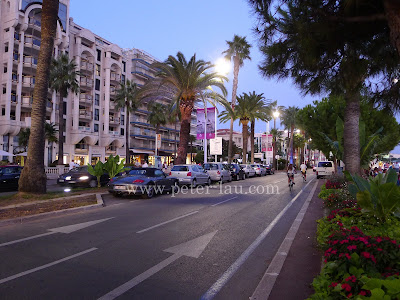 There was a World Yacht event going on. 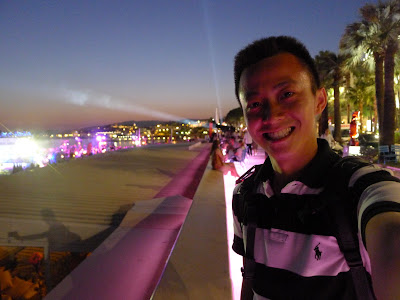 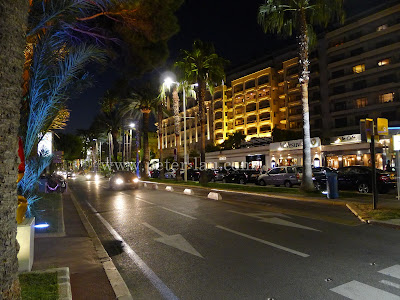 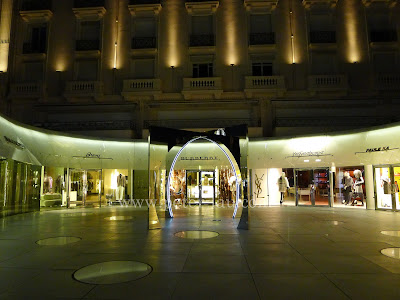